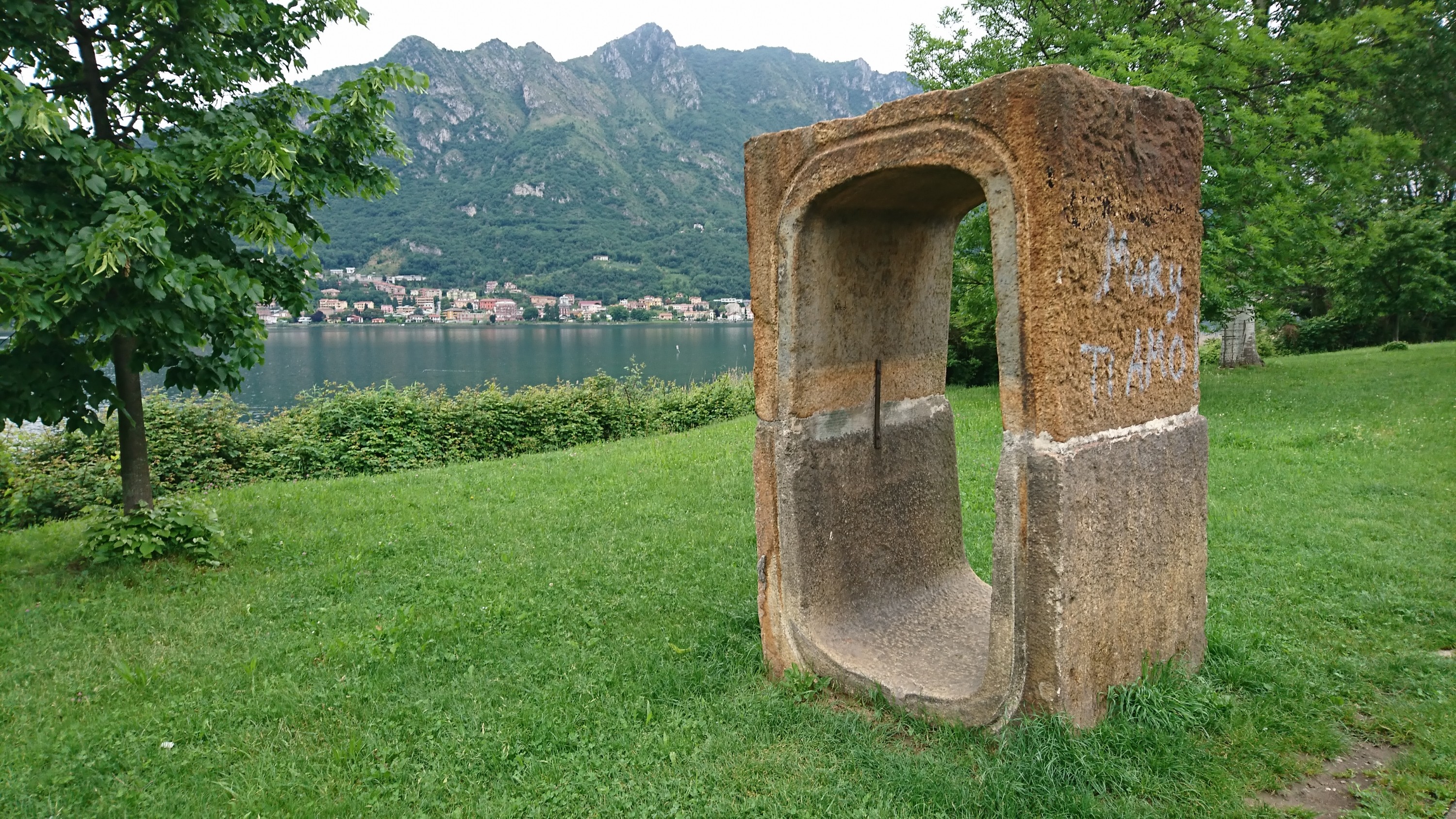 I often go jogging along the lake following the cycle path parallel to Viale Don Giovanni Ticozzi heading towards the Rivabella campsite. Midway between the Bione sports club and the campground,  there is an unusual concrete structure standing on the grass next to the path. It looks like two U shaped blocks of concrete held together by cement and reinforced iron brackets and bolts. A desperate admirer wrote “Mary Ti Amo” (I love you Mary) on the side as his heartfelt declaration of love. It is heavy and weather-worn and in a way, sadly lost, as if it was thrown off a truck and abandoned. Is that what happened? Or is it a piece of artwork?

In an effort to get an answer, I asked the local Facebook group of residents. I was told the structure has been there for years, about 20 years.

The fun-spirited community gave me some very amusing answers as to what it might be:

The most plausible and true answer explaining what it is:

The pylon towers of the Messina straight

SAE was established in 1938 and constructed high tension transmission towers. The pylon towers of the Messina straight were fabricated by SAE workers in Lecco. After acquisitions and mergers, the factory in Lecco was eventually closed. Today, the former employees have created the SAE Lecco Club and charitable organization.

The “unusual structure” has new meaning for me now. I believe it should be given some sort of official status such as a plaque of recognition remembering the hard-working citizens of Lecco.

Below, a video of SAE vintage film footage published on Youtube by Gianfranco Oberti

Originally from New York, Celia now spends her time between Milan and Lake Como sharing her discoveries and experiences living in Italy. Follow @CeliaAbernethy on Twitter

Lake Como is shaped like an upside-down Y . Como is at the southwestern tip and Lecco is at the southeastern tip. At the middle point, we find Bellagio. All along the shores in between, there are lovely little towns and villages.
Read more

Plan Your Trip To Lake Como

Ciao! I’m Celia. Originally from NY, I’m now living la dolce vita and on a mission to live it to the fullest! Get a personalized itinerary plnning pack for Milan & Lake Como. I hope to inspire you to explore Milan & Lake Como, the culture, cuisine and creativity. Contact me with your questions.

Get Lake Como in your inbox