One of Italy’s most beautiful natural spectacles is just 90 km from Milan. It’s called the Orrido di Bellano. A natural waterfall and gorge carved into the rocky mountainside of the pre-alps in the city of Bellano on Lake Como.

It is said to be in the making for over 15 million years. It’s a natural gorge carved by glacial waters of the Pioverna Streams. Located on the eastern shore of Lake Como in the northern town of Bellano , it’s only a 40 minute drive from Lecco. Orrido means ‘horrific’,  it’s named that because of the howling echo noise the waters make in the caves. Bellanese poet Sigismondo Boldoni described it as “Orrore di un’orrenda orrendezza”  “Horror of  horific horridness .”  The name has hence stuck. 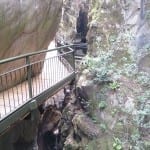 Catwalks and walkways have been built for visitors to walk inside the gorge. It is a little scary at first, but it is well built and secure. Curiosity and wonder override any initial fear and you are drawn into the cavernous corridor . As much as you would like to NOT look down, your eyes can’t help but be mesmerized by the boundless,bursting waters.

At the end of the cavern path you come to a tall cascading waterfall which plunges in to a  lagoon of pure,blue, calm waters. It’s the perfect place to sit and meditate recognizing with gratitude the beauty of nature.

The stone entrance was build in the 1700’s. The nearby tower and house  “Cà del Diavol”  the “Devil’s House” aptly named for it’s frescoes depicting the devil, is believed to have been built in the 1800’s, as the earliest  documented image of it is from 1840. 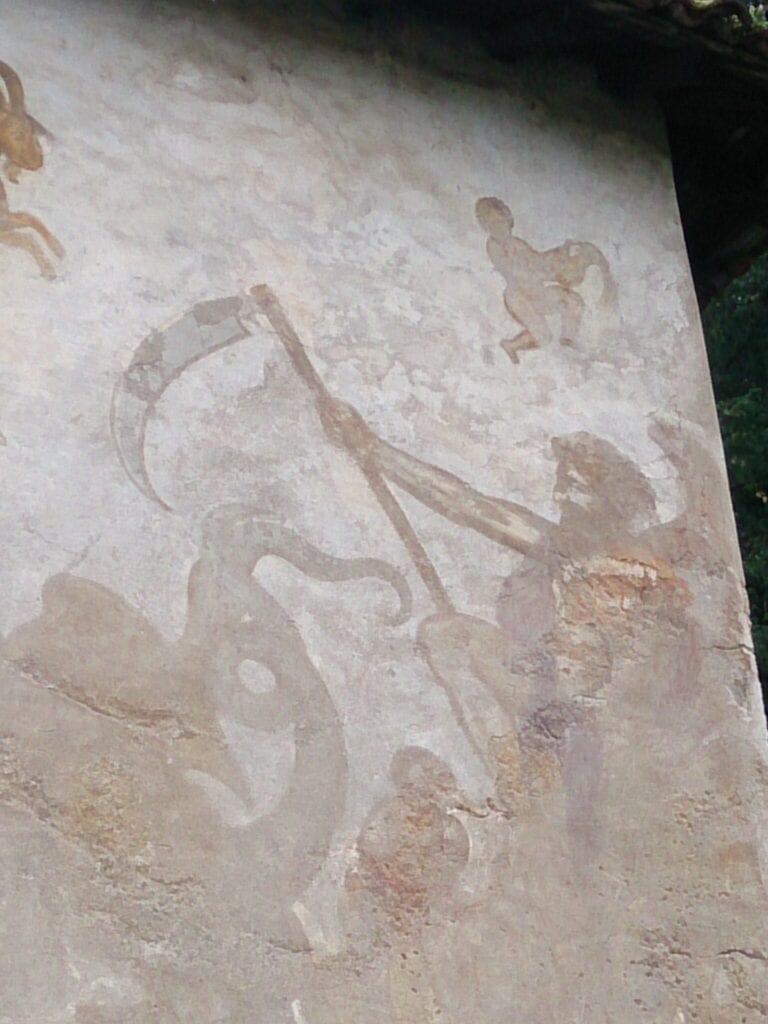 I was awestruck by the grandeur and splendor of this natural scene and intrigued by the unusual  frescos of the Cà del Diavol. Orrido di Bellano like many of Italy’s hidden treasures has little publicity and attention. It is not on the UNESCO list, but it certainly is a world heritage and deserves the care and conservation to keep this little part of our planet preserved.

Update:  the park is under new management by the municipality and have cleaned it up beautifully.

A previous version of this post included this statement:
“The only thing I thought that took away from the experience was the entrance park which  has been decorated with second-rate, ghoulish figures and mannequins; a giant witch, a vampire in a coffin and an atomic zombie.  Surely, it was done for the sake of  the ” Horror” theme , in the efforts to entertain children, but it GREATLY devalues the gift that the city of Bellano has been entrusted with and its  natural magnificence.”

The terrible ghouls and witches have since been removed.

View All
We use cookies on our website to give you the most relevant experience by remembering your preferences and repeat visits. By clicking “Accept”, you consent to the use of ALL the cookies.
Do not sell my personal information.
Cookie SettingsAccept
Manage consent

This website uses cookies to improve your experience while you navigate through the website. Out of these, the cookies that are categorized as necessary are stored on your browser as they are essential for the working of basic functionalities of the website. We also use third-party cookies that help us analyze and understand how you use this website. These cookies will be stored in your browser only with your consent. You also have the option to opt-out of these cookies. But opting out of some of these cookies may affect your browsing experience.
Necessary Always Enabled
Necessary cookies are absolutely essential for the website to function properly. These cookies ensure basic functionalities and security features of the website, anonymously.
Functional
Functional cookies help to perform certain functionalities like sharing the content of the website on social media platforms, collect feedbacks, and other third-party features.
Performance
Performance cookies are used to understand and analyze the key performance indexes of the website which helps in delivering a better user experience for the visitors.
Analytics
Analytical cookies are used to understand how visitors interact with the website. These cookies help provide information on metrics the number of visitors, bounce rate, traffic source, etc.
Advertisement
Advertisement cookies are used to provide visitors with relevant ads and marketing campaigns. These cookies track visitors across websites and collect information to provide customized ads.
Others
Other uncategorized cookies are those that are being analyzed and have not been classified into a category as yet.
SAVE & ACCEPT
Powered by